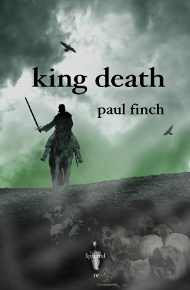 When I found out the setting of the latest chapbook from Spectral Press, I was a bit excited. Okay, I was a lot excited. I absolutely love stories set in medieval times. Throw in the Black Death, and I couldn’t wait to feast my eyes on King Death by Paul Finch.

From the back cover of the book:

In 1348, England is stricken by the Black Death. The worst pandemic in human history has reached the kingdom of the warlike Edward III, a monarch who in battle against human adversaries cannot imagine defeat.

Little wonder that fear of the supernatural reaches an all-time high. Little wonder stories ignite about witches and demons spreading the plague, about ‘King Death’, an awesome harbinger of doom from whom there is no protection.

Cynical opportunist Rodric doesn’t believe any of these. With reckless indifference, he sets out to enrich himself.…

I was totally enthralled by this story. The setting is spot-on, making me feel as though I was standing in plague-stricken England. Rodric’s character is an interesting look at how greed and opportunism take advantage of perilous situations. However, even though it appears the world has changed to his advantage, Rodric is about to find out what it means to come face-to-face with King Death.

I’m beginning to feel like a broken record, but this is yet another gem from Spectral Press. It is hard to believe that a start-up publisher can put out so many consecutive thought-provoking stories, but somehow Spectral Press has done so. After reading the amazing works that have been put out in its first year of existence, I can’t wait to see what the future holds for Spectral Press, a truly unique and welcomed publisher of well-told stories.
Posted by Bookhound78 at 6:01 PM

I read this earlier in the week too, and wholeheartedly agree. Really good stuff.

"Of all the diversions of life, there is none so proper to fill up its empty spaces as the reading of useful and entertaining authors." —Joseph Addison

Feel free to e-mail your comments or questions to me.